From 5-8 September 2019, twenty-seven young leaders representing eighteen different nationalities, and engaged in fields as varied as technology, medicine, law, media, education, finance, and public policy gathered in Annecy, France for Aspen’s Young European Leaders seminar. After two successful editions in Spoleto, Italy and Ronda, Spain, this third annual gathering, co-hosted by Aspen France and Aspen Germany and supported by the Aspen Initiative for Europe, was held at the Centre des Pensières of the Mérieux Foundation on the shores of Annecy Lake.

This year’s theme, ‘’Europe, the Next Generation, Shared Values,’’ centred around a series of texts selected by longtime Aspen moderators Leigh Hafrey, Senior Lecturer at MIT’s Sloan School of Management, and Miguel Herrero, Professor of Classics at the University Complutense of Madrid. During an open session, participants discussed Virgil’s Aeneid, before spending Friday’s two sessions discussing texts ranging from the Declaration of the Right of Man and of the Citizen to Primo Levi’s If This is a Man to Max Weber’s Protestant Ethic and the Spirit of Capitalism and Pope Francis’s Laudato Si.

A keynote address during Friday’s dinner was delivered by Alain Mérieux, Chairman of the Institut Mérieux and President of the Mérieux Foundation and Fondation Christophe et Rodolphe Mérieux, two independent family foundations dedicated to the fight against infectious diseases in developing countries. He discussed his personal and professional experiences and lessons learned throughout a storied and truly global career in the healthcare sector. During subsequent exchanges with the audience, he offered advice on the qualities most crucial to leadership, the importance of seeking new experiences and opportunities, and, in fitting with the seminar’s theme, his views on the future of Europe, its place in the world, and current challenges and opportunities. 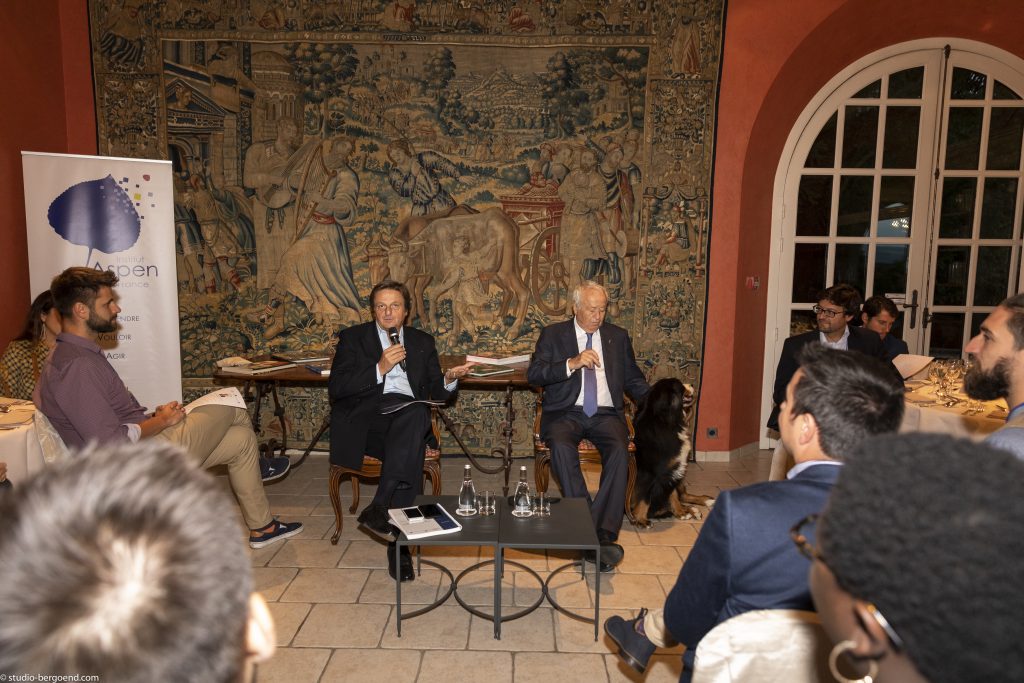 The return to the seminar table on Saturday saw discussions ranging from Machiavelli’s The Prince to Peter Schneider’s The Wall Jumper, and concluded with a timely discussion of the pitfalls of contemporary technology and surveillance capitalism, and a debate, inspired by Madeleine Albright’s Fascism: A Warning, around the extent to which fascism is reemerging in contemporary politics. The participants also broke off into small-group discussions during Saturday’s session, reconvening to discuss and debate the relative importance and sometimes contradictory role of different values and their importance in leadership.

While most of the weekend was spent in deep discussion around the seminar and dinner tables, the group also had the opportunity to visit the beautiful and historic city of Annecy, located a short boat ride across the lake from Les Pensières. During an interactive visit, participants tasted local chocolates, learned about the history of the town’s old prisons and church, and participated in a blindfolded team-building activity through the narrow old-town streets.

Sunday morning’s session concluded with a discussion of texts by Vaclav Havel, Ursula le Guin, Thomas Piketty, Mario Draghi and Chimamanda Adichie. The final hour was devoted to personal reflections on lessons learned from the seminar, with each participant also writing a personal letter to his or herself, to be received by mail in six months.

The fourth edition of the Aspen Young European Leaders seminar will take place in September 2020, co-hosted by Aspen Germany and Aspen Central Europe.