A non-profit association, recognized as being of general interest, independent and non-partisan

The Institut Aspen France is a non-profit association under the French law of 1901.

The Institut Aspen France is administered by an executive board composed of :

Administrative Board of the Institut Aspen France

Jean-Luc ALLAVENA – Chairman of the Administrative Board

Jean-Luc Allavena, Chairman of the Administrative Board 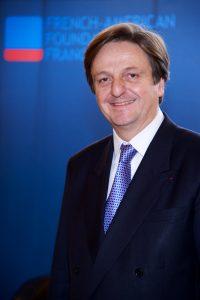 Born in Monaco in 1963, Jean-Luc Allavena is a Monegasque businessman and company director.

After graduating from HEC Paris in 1986, Jean-Luc Allavena began his career at Banque Paribas (1986-88), then joined the Lyonnaise des Eaux group – now Engie – in 1989 as a financial controller.

In 1992, he became CFO of Techpack International. The cosmetics and luxury goods packaging company was the subject of one of the first major LBOs in France, with Pechiney and LBO France as shareholders. He was appointed Chief Executive Officer in 1996, and in May 1999 succeeded the company’s founding Chairman, Alain Chevassus. When Pechiney bought out the entire capital, Jean-Luc Allavena became director of its cosmetics-luxury division.

Born into an old Monegasque family, Jean-Luc Allavena headed the office of H.S.H. Prince Albert II of Monaco from 2005 to 2006, in charge of the organization and main orientations of the new sovereign’s early reign.

In 2007, Jean-Luc Allavena joined the investment fund Apollo Global Management in London as a Partner. Apollo is one of the largest alternative asset managers in the world with a portfolio of approximately 200 billion dollars. He initiated the buyout of Alcan Engineered Products – formerly Pechiney – in 2010 with the Strategic Investment Fund. The company, renamed Constellium, was successfully listed on the New York Stock Exchange in May 2013. Eager to finance major French industrial projects, Jean-Luc Allavena made other successful industrial investments, including Monier, Latécoère and Verallia.

He is now President and founder of Atlantys Investors. Jean-Luc Allavena is a director of the Altice Group, Verallia, and the Paris-Bertrand-Sturdza bank.

From 2010 to 2015 Jean-Luc Allavena was President of the French-American Foundation (then Honorary President), which is dedicated to strengthening ties between France and the United States.